the solid line is just your  AC series,  e.g. a performance

the vertical dashed lines are the interval borders which represent

the start and end date of the plotted performance. (these dates should also been found in the title)

Jürgen and I suggest to change the outlier chapter UN 5.3 in the next version of the standards.

At present we say:
„Omit the pin head and add outlier triangles pointing in the direction of growth, see Figure UN 5.3.“

We should agree on this minor change:

a) The standard outlier indicator is one triangle only (see in our new book „Solid, outlined…“ on page 88, figure 2.4-10)

Here the standards are pretty clear:

2
You might truncate the visualisation (pins, not bars!) of relative values as explained above: „If such an outlier is not important for business, e.g. a big relative variance of a small value, do not scale the whole chart to this outlier rather visualize unimportant outliers with outlier indicators.“

It seems to me that most people did not understand exactly what your proposal was – at least I didn’t.
Let me first give you some background information – and then we can discuss:

I have started with these chart and table „templates“ together with Holger Gerths in our Excel trainings more around 15(!) years ago. They are NOT part of the “standards” – although we used figures for demonstration purposes such as the figures CO 5.1-1, CO 5.2-1 and UN 2.3-5. Some details are not valid any more – other details might become valid in future versions. At the moment, we use these templates for the certification of software tools – and here we cannot demand 100% compatibility.
It would be great to have these and even more templates be part of the standards; this would make the many rules much more easier to understand – especially for beginners. So Jürgen and I tried to update these old templates in our new book; the templates on the pages 190..205 should be pixel perfect. But they are not – although we have spent very many hours on each of them to make them consistent. Some alert readers already have come up with first little mistakes…
Now coming back to template 07A (which corresponds page 194 in our book):
a) the lines have round markers to identify beginning and end of each month – plus the last trading day (2015-05-21).
(There is no detailed rule yet concerning the shape of these markers.)
b) vertical solid lines mark beginning and end of each month, a dotted line marks the last trading day (or any other non-month-end day).
c) two solid triangles highlight the two dates mentioned in the message.
d) two more markers highlight the 100% and the difference mentioned in the message.
e) there are tick marks at the beginning and end of the months – not at the last trading day.

When you look at a)..e): What would you like to change or add?

I find the visualisation with reference markers for the special date very helpful. But, I don’t understand why one line is solid and the second line is dashed. Can you help me?

and testing if the comment function is still working 😀

More scenarios of one type

As an update to Rolf’s comment on Januar 23, 2018, here is what we finally suggest in our book „Solid | Outlined | Hatched“:

1
Time scenarios
Previous time periods such as the previous year (PY) or the year before previous year (PPY) are shown lighter in comparison. This principle applied to scenario type actual data looks like this:

2
Update scenarios
The more concrete the scenario is for a period, the „denser“ the pattern will be. 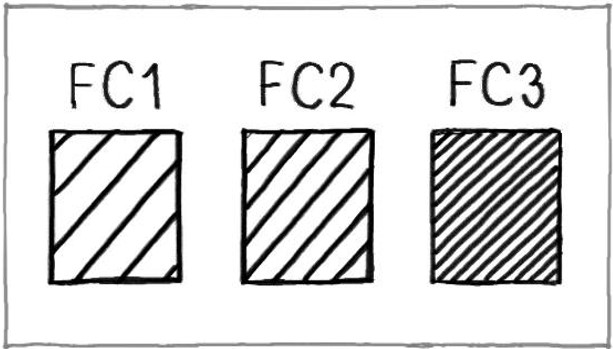 The workgroup has dealt concretely with the following questions:
– Which different scenarios do exist in the reporting world?
– How can these be combines an visualized?

The essential prinviple in teh development was to create a self-contained an uniform notation framework in which any number of scenarios can bei combines an scaled.

These scenarios are described below and rules for their visualization are defined. In general, these rules can be applied to the comparison of data as well as to deviations.

You will find the complete discussion paper in the next comment.

We look forward to your comments and a fruitful discussion!
Holger, Jens & Sina